Why it made the list: When I first put together my list of candidates for this list, Lost in Translation wasn’t on it. Then I read someone else on the internet putting it under consideration, and decided that I felt like watching it again, even if I was still pretty sure it wasn’t a candidate. Clearly, rewatching it told me I was wrong, because here it is. It’s telling that it was almost overlooked, as the greatness of the film comes entirely from subtle, quiet moments that don’t necessarily stand out as memory fades over time. You can still remember the movie as being pretty good, but might not remember exactly why.

Bill Murray gets the most attention from the film; understandably so, as he’s terrific in it, reminding people who didn’t watch Wes Anderson movies why they liked him so much. This was also the film that tricked us all into thinking Scarlett Johansson was a good actress. As a two-character study, the leads deserve the adulation they received for Lost in Translation, but most of the credit for its inclusion in this list is owed to director Sofia Coppola.

The greatness of the movie lies in how effectively it captures mood. The isolation, alienation, and overall melancholy of the picture is palpable throughout, achieved not only through the performance of the leads but through the patient, calm direction of Coppola. She lets the camera linger as characters stare out of windows, get lost amongst the throngs of pedestrians of Tokyo, or indulge in a solitary dip in the pool. For a film that is essentially two people talking, her script is surprisingly sparse, recognizing the power of that which is left unsaid. The result is an emotional connection more akin to music than film, touching something instinctual in the viewer without straining to manipulate the anyone’s emotions.

Significant scene: The heart of the film is the relationship between Murray’s Bob Harris and Johansson’s Charlotte, making any scene between them significant. It’s in these moments where we begin to shake off the overwhelming loneliness of the early portions of the film and remember how in the right situations, the deepest connections and conversations you’ll ever have is with someone you just met, and how you can begin to escape yourself if you travel far enough away from the people and places of your everyday life. The highlight for me is the quiet conversation they share in Bob’s room when neither can sleep. This is when their connection is solidified, as Charlotte perfectly enunciates the ennui that’s seemingly crushed my entire generation when she states “I just don’t know what I’m supposed to be”. It’s a simple line that I really connected with in 2003. Now it’s Bob’s half of the conversation that strikes right at my core, when he describes becoming a father:

Your life, as you know it… is gone. Never to return. But they learn how to walk, and they learn how to talk… and you want to be with them. And they turn out to be the most delightful people you will ever meet in your life.

Which accurately describes my life now. It’s all different now, to the degree that I only somewhat remember the mid-twenties guy who first connected with this movie. But while he might not yet be walking or talking, my son is absolutely the most delightful person I’ve ever met, so every time I watch this scene, I can barely swallow past the lump in my throat. 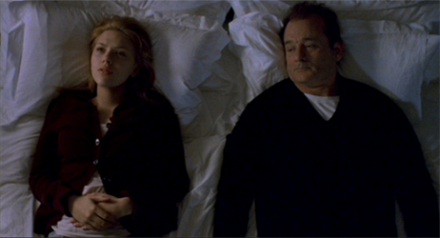 The more you know who you are, and what you want, the less you let things upset you.