Why it made the list: Great art can affect you differently at various points of your life. While the art remains the same, the changes in your life will make you approach it differently. Lesser works become impossible to revisit after a certain point in your development other than in exercises in nostalgia, as they become trapped in the ember of their time, and fossilized as fodder for a demographic you no longer fit. Truly great works open themselves up for different perspectives throughout your experience with them, growing in stature as they integrate with the new phases of life you find yourself in.

I bring this up relation to Children of Men because it is one of many entertainments that work on a different level for me since I’ve become a father. It’s impossible to discuss parenthood without becoming cliché, since it’s the most common experience in all of life and everything that can be said about the subject already has. Moreover, it’s very easy to come off as patronizing to say things like “you’d understand if you had kids” to people who haven’t yet or never will have any, which isn’t my intention. I’m not suggesting that I connect with Children of Men on a deeper level than you just because I’ve chosen to breed, but it is a different experience. Or at least it’s different for me.

My prior experience with the film largely centred around its bravura filmmaking, challenging political stance, and original dystopian vision. And really, if that’s the only connection you have with the film, it’s already enough to rank it as one of the best of the decade. Alfonso Cuarón had an uncompromising vision for how he wanted to adapt PD James’ novel, and executed it brilliantly, making a movie that is both stunningly apocalyptic while hauntingly personal. The problem of many future-imperfect films is that they create a world so different from our own that it’s hard to get invested in its affairs. Or they spend so much time dealing with the fantastic premises of their stories that they fail to fully develop their characters, choosing instead to make them mere symbols of whatever ideology their premise is trying to support/refute.

Children of Men does indeed have a fantastic premise: what would happen to the world if everyone stopped being able to have babies? The film is set in the future (2027 to be specific), but not so far that the world doesn’t resemble our own. It’s our world with slightly more advanced technology and a destructiveness appropriate for a world awaiting the end of days (it’s a misnomer to call the movie post-apocalyptic, when in actuality, it is pre-apocalyptic, in a world destined to end with a whisper, unless its factions insist on a bang). But Cuarón succeeds in grounding his hellish parable by getting the premise out of the way the instant the film opens, then limiting its scope to the perspective of a single character (Clive Owen’s Theo Faron). Yes, this is a film of big ideas, but what makes it most effective is that those ideas are filtered through two human beings (Theo and Claire-Hope Ashitey’s Kee). Because the film strives to document the end of the human condition, and all that entails, it’s vital that the film be driven by humanity.

Spoiler Specifics: Which brings me to the parenthood/changing perspectives element. My earlier appreciation for the film was largely intellectual. This movie is damn impressive, in how it manages to retain the feel of an indie while still convincingly pulling off all out war scenes. Cuarón and cinematographer Emmanuel Lubezki basically had to invent new ways of filming things to pull off some of the effects they wanted, achieving shots that I’m sure will be studied in film schools for time immemorial. PD James’ ideas about a world of no children are as thought-provoking as any dystopian future fiction I’ve encountered, while the performances throughout are uniformly great.

But now that I’m a father, the idea of a world without children is so much more powerful for me. Obviously, one not need be a parent to realize how horrible such a world would be. It is possible to love children without having your own. But the basic genetic rewiring that’s occurred since my son was born connects me to the idea on a level that didn’t exist for me before. It’s not about mentally unpacking all the consequences of a world with no future, or wanting to know the causes for such a phenomenon, or noticing how the people of this world transfer their parental instincts to their dogs. I just get it. That a world without my son wouldn’t be worth experiencing, and a world where I had no hope for his future is just about the worst thing I could imagine.

Which is important, because the movie doesn’t waste its time with exposition on what life is like in 2027. We’re thrust into it immediately, experiencing events in real-time. Even big character-defining back story is dealt with naturally, like the knowledge that Theo and Julian once had a son who died at a young age. The film has no time to make that knowledge hit, but I no longer need it. You tell me that a couple’s relationship fell apart due to the death of their child, leaving our hero an empty shell of a man in the 19 years since? I get it, and not because I’ve read some statistics or could imagine it. It’s because I can’t imagine it, because doing so, even for an instant, is bound to leave me lying awake in a cold sweat, wondering if I should risk waking him up to make sure he’s okay. And it wasn’t like that before. This film was always intense, and I imagine is for all viewers with all sorts of perspectives, but it’s intense in a different way for me now.

Now, does that mean I’m bringing a lot of my own baggage into a reading of what’s on screen? Of course I am. We all do. The best art encourages it. Children of Men has many elements that would allow other people to bring other perspectives in, be they parents, elderly, refugees, activists, midwives, or what have you, making it a film densely packed with ideas and perspectives all within a taut 105 minutes that is all about forward momentum. I loved this movie one way before, a different way today, and will probably love it another way in the future.

Significant scene: The most talked about and probably most impressive scene in Children of Men is undoubtedly the single take car ambush scene, where Cuarón had to design a mechanism for keeping the camera moving and the actors had to move in and out of their seats to do so. It’s stunning. But to support my “becoming a man with a child has changed Children of Men” thesis, I’ll instead focus on the film’s other big single take scene: Theo and Kee exiting the building with her baby during the battle of the refugees, Fishes, and army.

Obviously, it’s a powerful moment, where this crumbling world finally gets a glimpse of the hope that’s been denied to them for almost two decades, resulting in an impromptu (and temporary) ceasefire. It’s the big moment of the movie, yet everyone involved wisely plays it small. But still, I’ll admit, it didn’t fully register with me before, perhaps even feeling a little simplistic. What can I say? Like a typical young guy, I just wasn’t that into babies (had never even held one until I had my own). But now? Now it speaks to me in ways other scenes can’t. I get it. It’s perfect.

You walk around a mall with a newborn, and people will stop and smile, even though our world is lousy with babies. And as a parent, you crave that attention even when trying to protect your child from unwanted attention because they are your greatest achievement. So in a world that hasn’t heard the cries of a baby in 18 years, the stunned reaction of the combatants around them is perfect. It’s last moment of decency in a world about to die, unable to process the news that they just may yet live again. 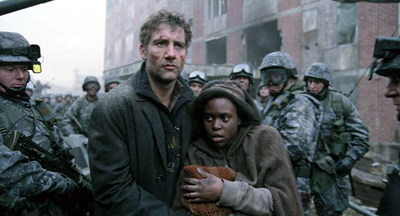