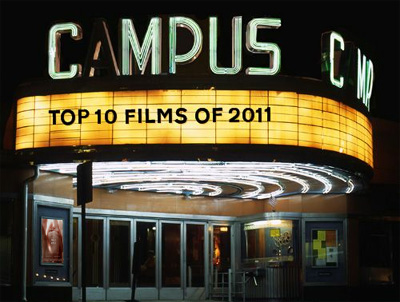 This list is so out of date that this should be in sepia tone.

Look, you and I both know that there’s no legitimate reason to writing a post like this in late June. I missed anything resembling timeliness months ago. But the way I figure it, why get lost in a sea of year end lists at the actual year end when you can do it when the next year is half over? Plus, writing this list late then using the intro paragraph to explain its lateness is practically a Critically Speaking tradition now.

I probably didn’t see enough movies to make an observation about the year in film as a whole, but if I’m not going to let something like the calendar stop me from posting, why should a lack of experience? By and large, when it came to the biggest promoted films, be they blockbusters or Oscar contenders, it wasn’t that impressive a year. Critics I read and trust have come out and said 2011 was one of their favorite years for film, but their lists supporting it are full of films that you’d be lucky to catch at all unless you live in a major metropolitan city. So I’ll trust them that the farther you looked this year, the more gems there were to unearth. Which would be awesome if I had more time to watch movies. But I don’t, so I was largely underwhelmed by the offerings of 2011, which is probably the biggest reason why I had little motivation for posting this in a timely fashion. But even with that lack of motivation, I have to say, I stand by every choice on this list. Maybe only one of them is what I’d truly describe as “great”, but all of them were well worth my time. And yours.

10. Mission: Impossible – Ghost Protocol – It turns out that to climb out of movie jail for the unforgivable crime of sullying his aura of celebrity, all Tom Cruise had to do was scale the largest building in the world. I have questions about the quality of the connective tissue, but the action scenes of this film were more than worth the price of admission, even if (especially if) that price was for an IMAX screening. “White knuckle action” is a cheap cliché, but when it comes to what Brad Bird was projecting on a 50 foot screen, it was the literal truth.

9. Moneyball – Just because this was right up my alley — a baseball movie written by Aaron Sorkin based on one of my favourite books — it doesn’t mean I wasn’t surprised when Sorkin, Bennett Miller, and Brad Pitt pulled it off. An underrated element of Michael Lewis’ writing has always been his ability to find narrative in seemingly complicated subjects, but that still doesn’t mean that I had faith in a film’s ability to adapt his look into the use of advanced statistics to exploit market inefficiencies. This movie successfully did, largely on the strength of Sorkin’s gift for dialogue, a strong supporting turn by Jonah Hill, and a full wattage movie star performance by Pitt that finds a way to invest us in a climax that centres around a baseball regular season winning streak (which, any stat-head will tell you, was a statistical anomaly more than sign of real success).

8. Win Win – This was the first movie I saw in 2011, and it took quite awhile until anything came along to replace it as my favourite for the year. In an era when quiet, adult films focusing on personal relationships and growth have been all but priced out of the market, Thomas McCarthy keeps consistently turning out just that. Even the world of indie film doesn’t frequently play in this sphere, tending more toward the controversial or offbeat, while McCarthy finds realism without drowning in misery or sensationalism. Some have wondered if McCarthy can step outside of the comfort zone he’s established with Win Win, The Visitor, or The Station Agent, but since he’s one of the few people delivering films with genuine personal connections, I’m unconvinced that he needs to.

7. Rango – This one surprised me. I haven’t seen any other of Gore Verbinski’s films and have had basically no interest in Johnny Depp for well over a decade. So I initially dismissed this as yet another exercise in Deppian quirk. And, well, it certainly is quirky, but what stood out the most was how inventive it was. It was less about furthering Depp’s brand of cult-ready quirk and more about expanding the possibilities of the medium.

6. The Adventures of Tintin – It’s like Steven Spielberg wanted to take another crack at his return to the world of Indiana Jones after the disaster that was Kingdom of the Crystal Skull. The high adventure of Tintin was exactly what I wanted out of that film, plastering a grin on my face from ear-to-ear throughout the single-take chase through the port of Bagghar. I had no connection to the Hergés creation beforehand, so my admiration for the film begins and ends with what Spielberg, Peter Jackson, and company accomplished here. My second favourite Spielbergian creation of the year.

5. Midnight in Paris – I’m digging the new Woody Allen phase of films that double as travelogues (or at least the ones every few years that people actually pay attention to), with Midnight in Paris being my favourite of the bunch. Not only was it a clever little romp through the cultural history of 1920s Paris, but it was also a loving portrait of the city itself. I have a few quibbles with the film, but none of them managed to overshadow how completely charmed I was by the film.

4. Super 8 – JJ Abrams went back to his childhood of Super 8 movie-making and Spielberg-worship to deliver the most satisfying blockbuster of the year. We live in an era of pre-packaged franchises and remakes, some good, some not. Super 8 was a refreshing reminder of a time when this wasn’t the case, when the blockbusters of the summer were more fresh, idiosyncratic, surprising even. The fact that Abrams did so by recreating the Spielberg/Donner suburban adventure films of my youth doesn’t escape me, preventing me from calling his homage “original”. Not sure that it matters. If going back a few decades is what it takes to remind viewers of the magic of the cinema, than so be it.

3. Drive – Without intending to, I created three pairings in my rankings: low-key sports films at 9-8, animated films at 7-6, stylistic 80s pastiches at 4-3. I’d listen to arguments that Drive is largely an exercise in style and delivery mechanism of cool. I just wouldn’t fucking care. Drive strips away any and all excesses to deliver a pure study in mood, masculinity, and striking bursts of adrenalin. And it was thrilling.

2. The Descendants – What makes George Clooney perhaps our most relevant movie star/artist is his constant desire to branch out into new areas, unafraid to challenge the trappings of his own celebrity. He’ll regularly do roles that make him look stupid, and even try to find ones that make look him schlubby. Which is all well and good, but every once in a while, we need him to take a role that trades off his natural charisma and reminds us how rare genuine star power actually is. When he can do that in an independent Alexander Payne movie, all the better. Payne brings out the world-weary intelligence that Clooney often inhabits in his best roles; Clooney brings a genuine humanism often buried under layers of cynicism in Payne’s other films. The result is a wonderful blend of comedy and tragedy that was nothing more or less than a glimpse into the complicated lives of ordinary people.

1. The Tree of Life – The only truly great film of 2011 that I saw, The Tree of Life affected me in such a profound way that even though I’ve taken half a year to post this list, I’m still not sure I’ve fully recovered. Cinematographer Emmanuel Lubezki has said that Terrence Malick’s filmmaking style was experiential, which is a perfect summation of its effect. It is not driven by the demand of narrative. Even the themes of grace vs nature, the loss of innocence, or the circle of life are secondary to the elliptical beauty of the random slices of life loosely strung together throughout the film. Sunlight beaming through sheer curtains as a baby gazes at his mother; a father’s fascination with his newborn’s tiny feet; children running through a cloud of DDT; the soft utterance of the word “mother”. All moments so hauntingly beautiful, so perfectly rendered, so primordially emotional that the only thing that kept me from choking on tears is the deep psychological blocks that I clearly set up a long time ago. Malick cares not about your needs for narrative structure, convention, or even answers. As a result, he delivered a movie that was more poetry than cinema, achieving a level of resonance that I can honestly say I’ve never experienced before from watching a film.